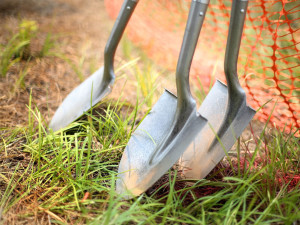 HUNTERSVILLE, N.C. — A new, Class A medical office building is officially on the rise in Huntersville, following a recent groundbreaking ceremony hosted by the site developer Charles Knox, of the Knox Group.

Called Gilead Medical Center II, the site is just off Gilead Road near Novant Health Huntersville Medical Center and adjacent to the Earth Fare grocery store. The two-story, more than 25,000-square-foot facility is valued at more than $6 million, and is scheduled to be complete near the end of the year.

“Gilead Medical Center II is unique because business owners have the choice to own their office space instead of just leasing it,” says Knox. “Area residents will also benefit by having a new, easily accessible facility that makes it easy to access care from local medical practices.”

Knox says space is still available for purchase or lease. Practices already confirmed for occupancy include Gilead Road Pediatrics and Internal Medicine, Selden Orthodontics and Dentistry For Kids. Future construction of an additional 5,500-square-foot medical office building on the site is also planned.